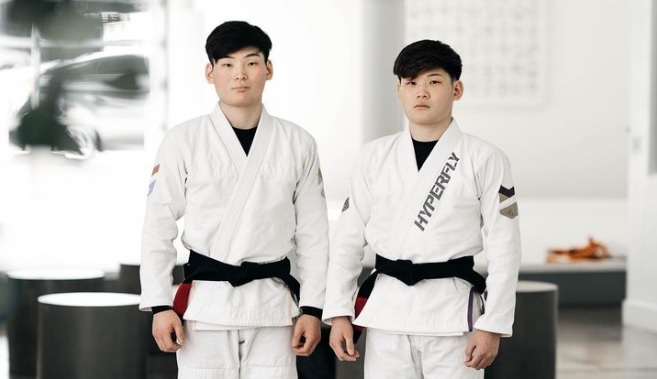 Reon and Hiryu Niwa number among the formidable rising class of rookie black belts who were promoted in the wake of impressive brown belt victories at no-gi Worlds, where Reon and Hiryu successfully closed out their division. The Niwa brothers, ages 22 and 21, respectively, cherish the promotion as “one of the most memorable moments [in our lives].” Both brothers have idolized their current coaches, Guilherme and Rafael Mendes, since they were children coming up through the early juvenile ranks. For Reon and Hiryu, receiving black belts from their childhood heroes – whom they used to watch from an ocean away – was a surreal experience.

Though not technically twins, you’d be forgiven for mistaking these two for one of the many deadly duos in the jiu-jitsu world who shared a womb before sharing a mat. Similarly-sized and only a year apart in age, each brother describes the other as one of his greatest assets in training, or as they put it, “best friends, and at the same time, best rivals.”

They compare themselves to their teammates, the Funegra sisters – currently the twin terrors of the juvenile blue belt scene – in terms of work ethic, and cite additional inspiration from other famous sibling pairs such as the Ruotolo twins, the Miyao twins, and of course, their own coaches, the Mendes brothers.

Originally hailing from Yokohama, Japan, where they began their original jiu-jitsu training, the Niwa brothers eventually moved to the US in order to train full-time at AOJ. It was a big leap for both Reon and Hiryu, who had primarily been full-time university students training only in the evenings with other hobbyists.

Turning pro, however, would require certain sacrifices – which was what drove them to drop out of school, and board that plane to California. Now, both brothers have made a point of surrounding themselves with other professional athletes with similar mindsets and goals – such as AOJ’s teen phenom Cole Abate.

While Abate may be younger than Reon and Hiryu, the Niwa brothers describe Abate’s work ethic as a tremendous source of motivation, and Abate himself as an excellent mentor. The 2022 competition season saw Abate working diligently with both Reon and Hiryu to elevate their no-gi game – which spoke for itself in the form of podium finishes at no-gi Worlds for both brothers by the end of that year.

According to Reon and Hiryu, the highly professional and driven mat culture cultivated by the Mendes brothers at AOJ has proven itself the best possible environment for the Niwas, who encourage other Japanese athletes chasing jiu-jitsu careers to get comfortable with taking more risks. As Reon and Hiryu explain it, sometimes, to reach the next level of the sport, a change in environment can provide exactly the right push.

To stay up to date on instructionals, seminars, and other upcoming events, check out their official website.