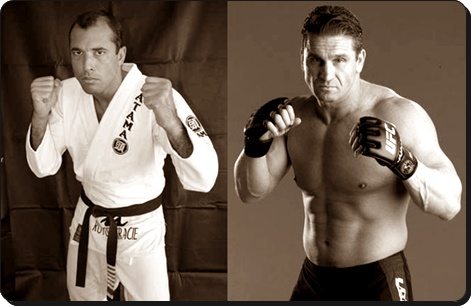 Ken Shamrock didn’t get the result he wanted against Kimbo Slice, at Bellator 138 on Friday. In spite of this, the fifty-one year old veteran fighter still has some big name opponents willing to face him.

Actually, one such opponent needs no introduction: another legendary UFC figure Royce Gracie.

Recently, Gracie (0-0 BMMA, 14-2-3 MMA) became a brand ambassador for Bellator, and it has been eight years since he last fought. Nonetheless, the forty-eight year old UFC pioneer, who beat Shamrock (0-1 BMMA, 28-16-2 MMA) at UFC One, then drew with him at UFC Five, has said that he will return from his long lay off.

News from MMAJunkie: Before his fight on Friday, in St. Louis, Shamrock told Scott Coker (the Bellator President) that he would like to face Gracie once more. Upon hearing of this, Gracie seemed to embrace the idea.

Of course, this potential fight lost some of its’ appeal, after Shamrock was beaten by Technical Knockout in the first round of his Spike TV headline battle. However, Bellator has proven that MMA fans enjoy watching household names — irrespective of how old or inactive they are.