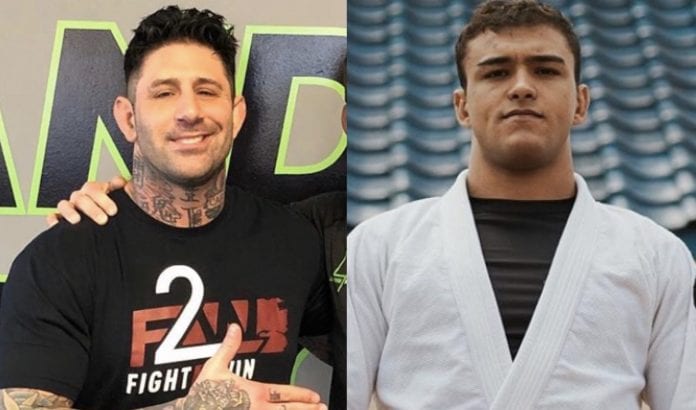 Fight 2 Win CEO Seth Daniels believes that Kaynan Duarte is the best pound-for-pound grappler out there right now. Nope, not Nicholas Meregali, not Cyborg, not even Gordon Ryan (“He doesn’t compete in the gi.”). So it makes sense, then, that Duarte is headlining yet another F2W show this weekend, capping off their 136th event with a heavyweight no-gi title match against Vinicius Ferreira.

For some, however, the decision may feel controversial. Duarte was just handed a retroactive suspension from the IBJJF for a failed drug test after Worlds, stripping him of his title. There are many in the jiu-jitsu world who decry the use of PEDs, saying that it’s unfair or “cheating,” even when no rules prohibiting PEDs are in place for tournaments. But Daniels isn’t one of them.

“To be clear, I love being on natural steroids. It’s the greatest thing ever,” says Daniels. The promotor has often been an outspoken advocate for PEDs, saying that they make grappling more exciting and claiming that “everyone” is on them anyway. Beyond the obvious impact that they have on grappling matches — people do love seeing a bunch of jacked shirtless dudes trying to rip each other’s limbs off — Daniels is an advocate for whatever helps competitive athletes maintain their health and longevity. He believes that steroids are a huge help for grapplers in that regard.

“If you look at F2W, the majority of my competitors are 30 or over anyway. Everyone at Master Worlds is on steroids. They’re not testing people because it’s their biggest tournament. I’ve been taking testosterone for years. It keeps me in the gym and helps me heal faster.” Daniels does, however, believe that there are limits. “Do I honestly think that teenagers and kids should be taking stuff? No, I’m not an idiot. I’m not letting my teenage son take steroids because of the effects it has on kids his age.”

It’s easy to see how someone who believes that PEDs can help with longevity would support a highly active grappler such as Duarte after he tested positive. “You can say what you want about Gordon, but he doesn’t win in gi and no-gi. To me, [Kaynan’s] the best in the world. I don’t think whether or not he takes steroids matters at all. I think Kaynan would’ve won [Worlds] regardless, and the guys he was competing against were on them for sure too, but we’ll never know because they didn’t test them.”

Daniels, who is a black belt in both judo and jiu-jitsu, also believes that merely being on steroids isn’t nearly enough to give “juiced” competitors a significant advantage over their clean opponents who have superior technique. “[Steroids] keep you on the mat, help you recover better, and make you a little bit stronger. But you’re not going to see me beating Mikey Musumeci, because he’s that much better than me. Look at Lachlan — people are sh*tting on Kaynan, but Lachlan beat him at ADCC with just technique. If people truly believe that size and strength don’t matter, all the purists, why does it matter if they take something that heals their injuries faster and it’s not illegal? Let everyone take whatever they want and let technique conquer all.”

Still, just because F2W and ADCC don’t prohibit PED use doesn’t mean that Daniels encourages athletes to take steroids when competing for the IBJJF. “I don’t care what the IBJJF does. I don’t think that we’re at the point anymore in the grappling world when the fighters should be so concerned about their standing in the IBJJF or the $3k a year they make from the IBJJF. But I think if you’re going to compete in an event that has rules against PEDs, you need to adhere to that.”

Still, though, he finds the IBJJF’s protocol for testing to be flawed and a bit unnecessary, especially in an evolving industry that sees athletes competing for tens of thousands of dollars for a variety of promotions across the globe. “I don’t understand why they’d remove someone who’s among the top two guys in the world. I think it’s stupid. It’s not taking away money that he made from other promotions, so in the end, does it really matter? Kaynan has made hundreds of thousands since then. All they did was tarnish his name a little bit. They suspend someone eight months after their test is done. Stupid. ‘And by the way, please pay your $35 for your membership fee.’ Stupid.”

He continues, “I think the IBJJF should test everyone in their events or no one at all. Every judo comp, they test for 1st, 2nd, and 3rd place. When I was younger, I failed tests for something bought over the counter at a supplement store. Is it that much safer to take mystery supplements, or TRT from a doctor? You get your blood test done and make it official, or you go to a chain supplement shop and listen to a 16-year-old kid and then he hands you some pills to shove down your throat. Do you really trust that retail guy more than a doctor?”

As F2W 136 approaches in San Diego, Duarte will once again be in the spotlight, demonstrating that, failed test results or not, the people still believe that he is one of modern grappling’s most entertaining and successful athletes. Daniels certainly believes so. “Everyone who thinks Kaynan only won what he did because of what he was on, they’re stupid.”

You can watch Duarte vs. Ferreira, plus many other exciting matches when F2W 136 streams live on FloGrappling this Saturday!


The views represented in this article do not necessarily reflect the views of the author or the Jiu-Jitsu Times.